The Night of Shame

On the next day of this horrible, frightening and unforgettable night, I woke up early in the morning. But I felt that I woke up from a fearful and monstrous nightmare. My two younger brothers, Chaban and Ramadan, were still having their deep sleep and perhaps at that moment they were having their nice dreams.

I was in need of enough time for remembering all what passed on of events last night. I remarked in the main salon my father submerged in a horrible silence and in a pensive mood while he was taking his breakfast with one of his wives.

However, and to my amazement, my father was, in general, behaving as if nothing has happened yesterday around midnight. In few minutes time my father stood up, looked around him carelessly, and then he went out of the salon in his way to the day work.

In the main salon, everybody without exception was quite aware and informed of what has taken place yesterday during the night in the residence of sequestration. When somebody spoke about my aunt Samar, who was buried yesterday in the cemetery, he would say, in a sarcastic tone, that aunt Samar, was in her way in a long journey to a far and foreign country and that she would never come back to our house.

My mother stared at me from a distance. From far, I could see and read some questions on the face of my mother. As for me, I was really suffering because of the tragic and horrible events of yesterday. With a lot of difficulty I moved from one place to another in the house as if I was dragging myself.

From now on and for a long time in the future, the idea of taking revenge for the death of my aunt, the victim of the madness, lunacy and perversion of my father, obsessed and even haunted me. The aim of the final objective of my life was to put an end to this foolishness of the criminal, my father, the monster of the family and the tyrant of the house. With the passing of time, days, nights, weeks and even months, the inhabitants of the big house, almost all of them, have forgotten the story of my aunt, Samar. I was astonished how the women in our family never mentioned the name of my aunt. Nobody mentioned her name and nobody made allusion to her existence amongst us, once upon a time. Most important of all, nobody dared to pose a question, to raise some interrogations regarding her unknown destiny.

A month has passed since the disappearance, the death, of my aunt Samar. During this period of four very long weeks, I was in fact submerged in a depression and in a suffocating melancholy. All the time I preferred to withdraw from the places where people were found and I was staying aloof.

My mother was only aware of the reason for which I was depressive and always sad. Several times she asked me to behave and even to live like all the other members of the big family. The aunt and her tragic end had been totally forgotten by everybody. New events have been taking place in the house and about which nobody dared to speak or to utter even a single word.

As in my case, and little by little, I slowly could recover from my depression and melancholy. My mother encouraged me to have a life like all others, all the members of the family, like Chaban and Ramadan, although they were still very young.

Nevertheless, I could not forger my nocturnal adventures and explorations and the watching and the surveillance of my father during the nights of most of the days of the week. At the end of the burning summer season and the beginning of the autumn season, the climate in our part of the world and in our quarter began to become colder and colder. I thought that in months outside those of summer, the nocturnal nightly adventures of my father would be decreasing in number and even it would become more and more rare and infrequent.

One night I stayed awake for a long time without being able to sleep. The time was before midnight and I felt the strong and the unbearable desire to go out of my bedroom in order to roam in the corridors, in the salons and the halls of the house. Actually, the time was suitable and appropriate for a turn of surveillance in the various sections of the house. In a very short time I was already outside of my bedroom and was ready to wander, roam and watch the nocturnal life in the house.

I passed in the two corridors and in a salon by walking prudently and carefully. As before, and since one month, I have noticed the appearance of a phantom which moved from one place to another in the midst of the darkness of the night in the corridor where I was found, or where I was hiding. I was waiting the disappearance of the phantom so as to come out of my hiding place.

I walked for some instants in the corridors without having a definite objective in my mind. All at once, my sister Laila, the daughter of the first wife made her appearance in the scene. As it was the case in the first time when I saw her, she was advancing towards the bedroom of my father.

Rapidly, she did not lose time to open the door, to enter the room and then to disappear totally in the obscurity of the room of my father The door was closed instantly and in fact I have heard the strange sound produced by the entry of the key inside the lock of the door.

I did not want at all to go to the window that looked at the garden because the climate was more or less cold. With much hesitation, I went nearby the door of the bedroom and I, with much care, put my ear on it to be able to listen to the conversation that was going on for sometime between the two lovers, my father and my sister, Laila. Fortunately, it was not very difficult to hear the following dialogue between the two lovers.

"It is almost five weeks since your last visit to my bedroom. Isn't it so, or was it more than that?" said my father to my sister Laila who, I could imagine, was still standing in the middle of the room somewhat far from the bed on which I thought my father was sitting.

"Yes, yes!! Father, we could say that approximately one month has passed since the last time we have seen each other." replied my sister in a somewhat trembling voice.

"Take off all your dress, the robe and the underwear and come here to my bed without delay, and sit down here on the edge of the bed. O! Yes!! It is better. Lie down here; Try to take a comfortable position. Here, take one or two pillows, use them as you like. Put them around you, behind you. Yes, this is better" said the father in a confusing way and may be nervously.

"As you want, as you wish, father. In a very short time I would be ready to lie down near you. Just one minute. Wait please, father I will be ready." replied the young girl while it seemed to me she was shivering.

"Tell me, Laila, tell me frankly if you are already pregnant or not. Did you have any period this month? This is very important." said the father. 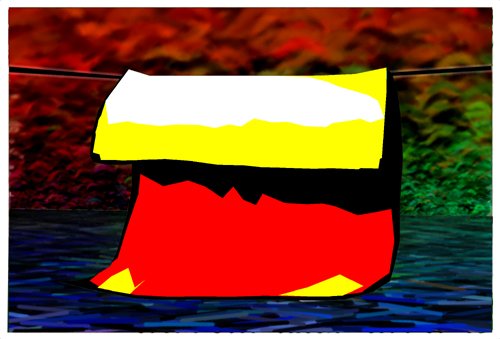 "I am pregnant? Impossible! I had my period since one more than a week. But yet this does not mean that I am sterile. Certainly, one day, I would carry in my depth your child who would be both my baby, my child and at the same time my brother. What a strange event. It is something unbelievable." said Laila, my sister in a low and trembling voice.

"It seems to me you are very prudent and careful in not mentioning the possibility of bearing a baby girl. You already know that the arrival of a baby girl would not be welcomed at all in the house." answered my father in a threatening and a menacing way while he was trying to put a pillow behind his back.

Then a terrible silence has dominated all the atmosphere of the bedroom of my father. I was afraid, for one reason or another, that my father had killed, strangled, my sister, his daughter Laila.

Yet, I was surprised, even astonished, to hear all of a sudden the sigh and the cries of enjoyment and excitement. The voice of the two has been mingling with each other in a typical nightmarish, dreadful and appalling Manner.

In my case I started to tremble and to shiver because of the horror which I have been witnessing for the last few minutes by the way of my ears. I did not want to stay where I was in front of the door and to listen to sacrilegious blasphemy.

After some hesitation, I changed my thinking and decided to stay there for more time to be able to listen to the conversation that was going on between the two, my father and my sister Laila. All was calm and tranquil and I estimated that the two were sleeping.

All of a sudden I saw somebody who was walking all alone in the corridors. The darkness of the night has prevented me from verifying the personality of the phantom whom I saw for several times before. In seeing the unknown walking and coming near to me where I was hiding myself I really tried to control my breathing. I tried to stop breathing. At the end of the corridor the phantom stopped walking near the window. The phantom kept there in silence.

As for me, I was obliged to go out of my hiding place and walk few steps towards the unknown. There was a certain distance that separated me from the phantom. From where I was I was able to discover that I was capable to know the identity of the phantom.

The obscurity of the darkness of the night has really enveloped all. The windows of the corridor and of the nearby salon were open and without curtains. Therefore, the very feeble light that came from the sky full of twinkling stars into the corridor helped me to see better the things that encircled me or were around me.

All at once I fixed my regards for a long time on the unknown person who was standing in front of me. I continued looking at the phantom till the moment when I was capable to tell myself whether the unknown was a man or a young girl, a woman.

In a very short time, I discovered that the person who was facing me was a woman, a young girl, something of the age of fifteen years or around that. Her hair, which was spread on her shoulders, assured me that the person whom I saw in front of me was certainly a girl, a resident of the section of sequestration. This silent confrontation between me, the little boy of nine years old and the phantom did not last for a long time. Because the moment the unknown person has seen me she went away to the direction of the cursed residence of incarceration. She, the girl phantom has totally disappeared in the darkness of the night of our house.

The Night of Shame